One of the unexpected challenges of dealing with Type 1 diabetes is the fear that another child will develop diabetes. I’ll have stretches of feeling fine, but then I’ll wonder if our two year old wet too many diapers in a day or is drinking too much (these things are so subjective and hard to measure!) and then it becomes an obsession.

I’ll get chronic stress, and have painful, vivid flashbacks to our son’s diagnosis (he was in severe DKA). And a sense of impending doom just becomes hard to shake.

In the night our two year old had a diaper that leaked in the night and the fears just gripped me. I weighed him in the morning and he had gained two pounds (a reassuring sign, as T1D causes weight loss). I did a finger poke and two hours after eating waffles and cold cereal he was 7mmols (126 US). Everything I found online says that under 7.8 (140) two hours after eating is normal, but I just can’t shake the stress.

I know there is just no assurance anyone can give me that he won’t develop diabetes and that is the part that is hard to accept.

I reached out to our Facebook support groups for advice about how they deal with this anxiety. It is a common issue, but the majority said that what helps them is knowing that if it happens with another child, this time they have the knowledge and the tools to deal with it.

One mom who has had a second child develop T1D, said that while it is hard to accept, you do adjust. She added that worrying about it happening was worse than dealing with the real problem.

This got me thinking. One of the symptoms of developing diabetes is excessive peeing. So when I hear a kid peeing copiously, my heart skips a beat. When I find out it’s our T1D son, there’s a wave of relief. We’ve found a level of peace with our T1D son, and I’m sure we’d reach that place eventually again with another child if we had to.

I realized that if we had to deal with a toddler developing diabetes, it would come with moments of holding him still to inject a painful needle while we both are crying. It would mean even less sleep and more mental stress as now two kids would need constant monitoring and more night checks.

But I also saw that if this were to happen in real life, it would be accompanied by God’s grace and tools to deal with the situation. In contrast, the phantom diabetes of my imagination makes me feel helpless. Because of its unreality, there is nothing I can do fix the problem I’m imagining. No shot of insulin to make the high go away, no gummy bear to give to fix the low.

Phantom diabetes of my imagination comes at me with vivid force all at once, with the painful moments compressed into a collage of terror. Real life diabetes comes at you one moment at a time with huge amounts of normalcy in between.

Dealing with the phantom diabetic toddler causes a selfish focus on what it will cost me and fills me with terror. Dealing with a real life child fills you with an overwhelming love for that child that gives supernatural strength to do whatever sacrifice is necessary. It would come with a sense of purpose that quiets the mind and steadies the will.

Phantom diabetes has no value, it doesn’t make me more aware of my non-T1D’s kids needs, it doesn’t help prepare or stock up on needed supplies. It does nothing but torment me and waste the precious time we should be savouring while our kids pancreases are working and they can eat and sleep without worry.

The phantom future is one of Satan’s favourite tools to torment us, rob us of peace and joy, and take our eyes off God and the gifts we should be grateful for. The phantom future comes as an angel of light saying that this worrying is the responsible thing to do. And that if we aren’t actively worrying about it tragedy will strike again. But that is all a lie.

So if you find yourself tormented by a possible scenario in the future where some difficulty or tragedy strikes, be it job loss or cancer, ask if there is some wise step you can take to avert the crisis or prepare. But if there is nothing you can do in the present to prepare, then be ruthless in identifying the distressing imaginings as unreality from the enemy. There is no value dwelling on it.

Jesus sternly commands us not to worry about the future, then adds compassionately that each day has enough troubles.

But real life will come with God’s grace, strength, comfort and wisdom, and a sense of purpose to deal with it effectively, and the support of family and community. So be ruthless with the phantom future, and trust our wise Heavenly Father to guide us into the real future with Him always by our side. 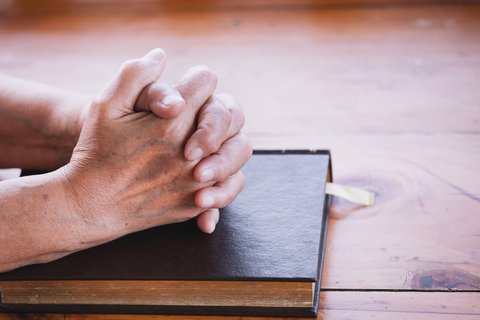 Practical Tips for Meditating on Scripture

Imagine if…every time after you ate, your food just went right through you? Suppose it never lingered in your stomach acid to get broken down, and the nutrients never got absorbed in your intestines? What would happen to your body? You would quickly grow weak and malnourished and you would not live long. It wouldn’t matter how regularly you ate, or what you ate, because without the process of digestion, you would die.

In a similar way, it is not enough to just “eat” God’s word by reading and memorizing it. For our souls to grow spiritually, we also need a process of digestion where we break down and absorb nutrients, applying them to our lives.

Scripture calls this digestion process “meditating.” Psalm 1 says that the righteous man’s “delight is in the law of the Lord, and in His law he meditates day and night.”

Here are some ideas that have enriched my meditation process. The Holy Spirit ultimately takes the text and uses it to bring us light, convict us, and comfort us, so none of these ideas should replace a prayerful dependence on Him.