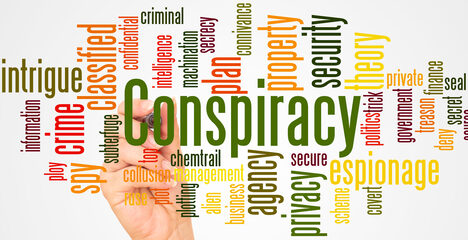 Today we are warned that if we don’t wake up and acknowledge the truth of ideas about the elite and the new world order, we will end up with another holocaust, and become slaves in their own new world order.

The irony is that over 80 years ago, people “waking up” to this secret evil power and taking action to stop “them” actually led to millions of innocent Jews being murdered.

Conspiracy Theories are fascinating, and in every age, especially in times of complex chaos, they will always inspire devoted believers who are convinced beyond a shadow of a doubt that the theories they believe are true and well established by the evidence.

The term Conspiracy Theory generally used to refer to crack pot theories held by a deranged radical fringe who held ideas like a flat earth.

But in the last year and a half, our world has been shaken up by a virus and the various government responses have felt so dramatic and unprecedented that ideas once written off as “conspiracy theories” are being firmly embraced by millions of thoughtful people.

In the name of the virus, freedoms have been taken and our constitutional rights have been so trampled that it feels like an evil elite group has taken control of our planet.

But social media has an awe-inspiring power to legitimize rumours and gossip. Photo shopping, editing techniques, and the proliferation of data from questionable sources and twisted facts and statistics, have given conspiracy researchers more than enough evidence to prove all kinds of theories.

I suspect right now that there will be many readers who made it this far who are feeling quite angry with me. They may feel I am belittling their well-evidenced view of the world, or that I am denying a very real and evil threat to our freedoms.  That is not my purpose. If you are still reading, please bear with me.

I’m not saying that there are not evil agendas at work.

The Media lies and distorts the truth. Politicians are corrupt.  Companies like to make wealth off people’s fear and suffering. There are wealthy elite with anti-God and anti-human designs for this planet.

In our world, there are evil agendas and groups that conspire to control and manipulate. Real evil plots have been hidden by corrupt politicians who tried to discredit whistleblowers by dismissively calling their exposés “conspiracy theories.”

What I am pondering is the “conspiracy thinking” that we all are so prone to and how I think it reveals a hunger for God.

The grand conspiracy theories that have been around for decades and are in full bloom right now share some common ideas:

– Nothing is as it seems, the truth is being buried by the powerful.

cooperative groups who have unlimited resources and are not hindered by the chaos and complexity of life.

– Their power is almost unstoppable in their ability to predict the future with their sovereign schemes and the way they leave hints of their future plans in movies and TV shows.

– Nothing happens by accident: everything is connected as part of their powerful schemes.

It’s almost as if believing in a world of random chaos with unpredictable weather and disease and capricious humans is more threatening to us than a world controlled by a powerful elite.

Our hearts do cry out for order; we want to know that things happen for a reason.

The good news revealed in Scripture is that things are NOT always as they appear.

There IS a sovereign Power working behind the scenes.

There IS an all-powerful Hand involved in wars, and plagues, and economic recessions.

There are always evil men conspiring for world domination. But this is our Father’s world and no purpose of His can be thwarted. He can bring the schemes and conspiring of men to nothing.

There are so many unanswered questions in our world right now. We face a complex situation where government agencies try to balance freedoms with health threats and over run hospitals as they deal with an unpredictable virus, and very mortal men prone to death and disease.

The truth about the political and medical issues we face today is so complex and difficult to discern amidst the flood of rumours, misinformation, propaganda, and censoring.

It feels overwhelming to try to figure out what’s fact and what is fiction in our newsfeed.

Thankfully we don’t have to. Paul tells us to reserve judgement, because there is a Judge who knows all and sees all. Vengeance is His and no evil scheme against Him will prosper. He is working all things for our good.

In a world full of lies and misinformation, our duty is to stay in the Word.

It is our only standard of truth and it is sufficient to equip us to obey God’s will.

If we wake up to the fear of the Lord and obey the commands of Christ, we will not be guilty of compliance with an evil agenda.

But, as I showed at the beginning, when we let manmade lies and rumors fill our hearts with fear and drive us to desperate acts of self-salvation and revolution, we can be manipulated by Satan to bring great harm and division into the world.

So be encouraged. God is on His throne, every lie will be exposed, and every conspiracy foiled.

We don’t have to carry the pressure of exposing every lie. We can be quick to hear, and slow to speak, we can take time to verify sources, and, when confused, withhold judgement until a later date.

But don’t neglect His word. Don’t take your eyes off Jesus. He is our only hope.