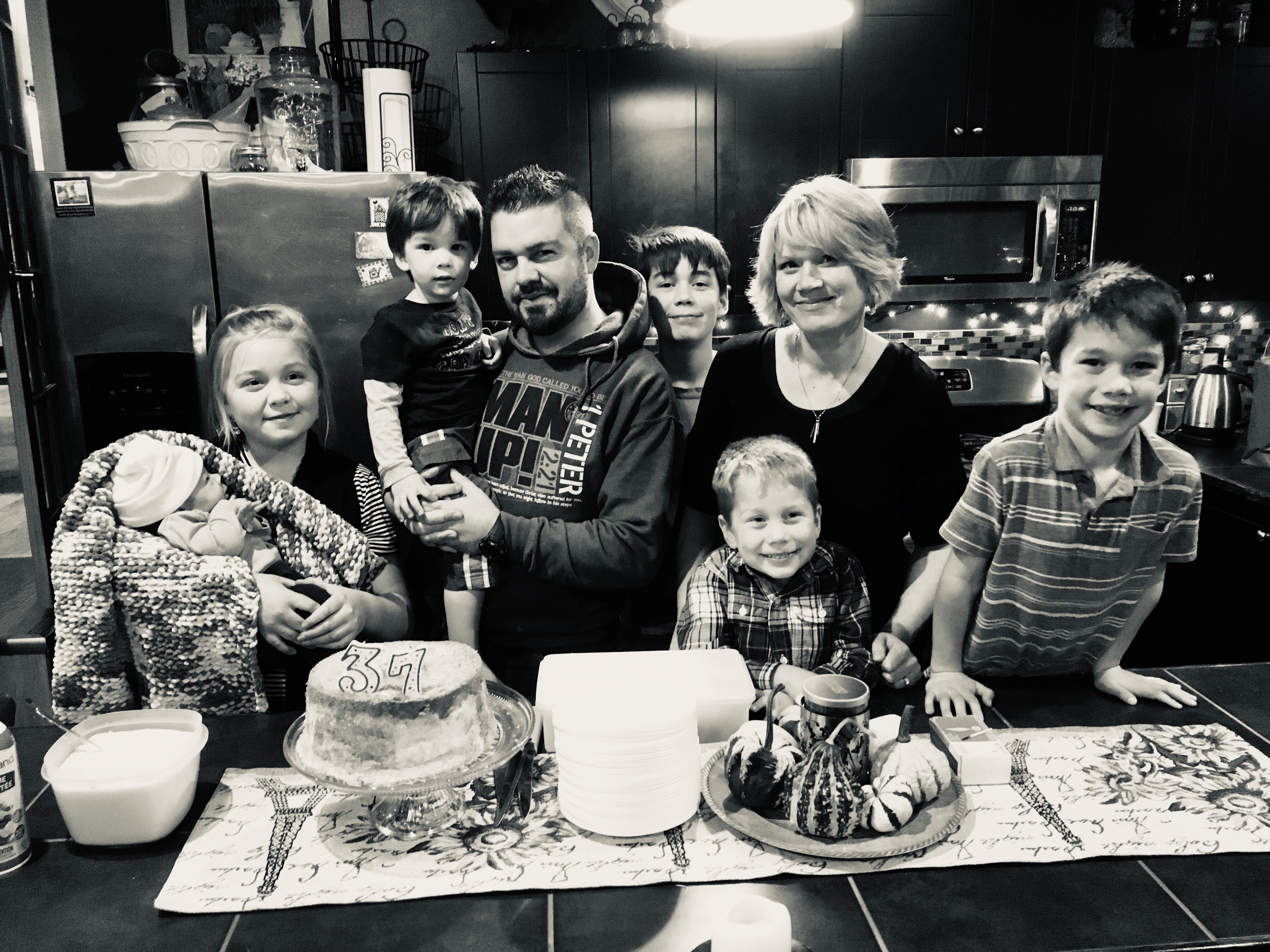 Meeting you here, at year’s end, I have one word for both of us to grab hold of as we look backward over 2019 and forward into 2020: gratitude.

It’s a weapon, friends. Wield it against the dark forces of discontent and anxiety that are always attacking our minds! Being thankful isn’t a nicety. It’s a necessity if we want to be present in the moment and grow closer to Christ. Lack of gratitude draws us away from the Good Giver and deeper into ourselves. I speak from the trenches: it’s a daily fight to be thankful and focus on all I have been given rather than on all that I wish I had or on all that I fear might be taken from me.

This year’s biggest fear was that we’d lost our sixth baby when I started bleeding at the end of my first trimester. After twenty-four nightmarish hours, there were a lot of tears of relief when the ultrasound tech said, “Well, we still have a baby!” and showed us tiny Thomas, kicking merrily while surrounded by a large hematoma (blood clot between placenta and uterus). The remaining six months of pregnancy became a journey of learning to trust God in huge unknowns – would Thomas make it to birth? Would the hematoma cause a miscarriage or placental abruption? 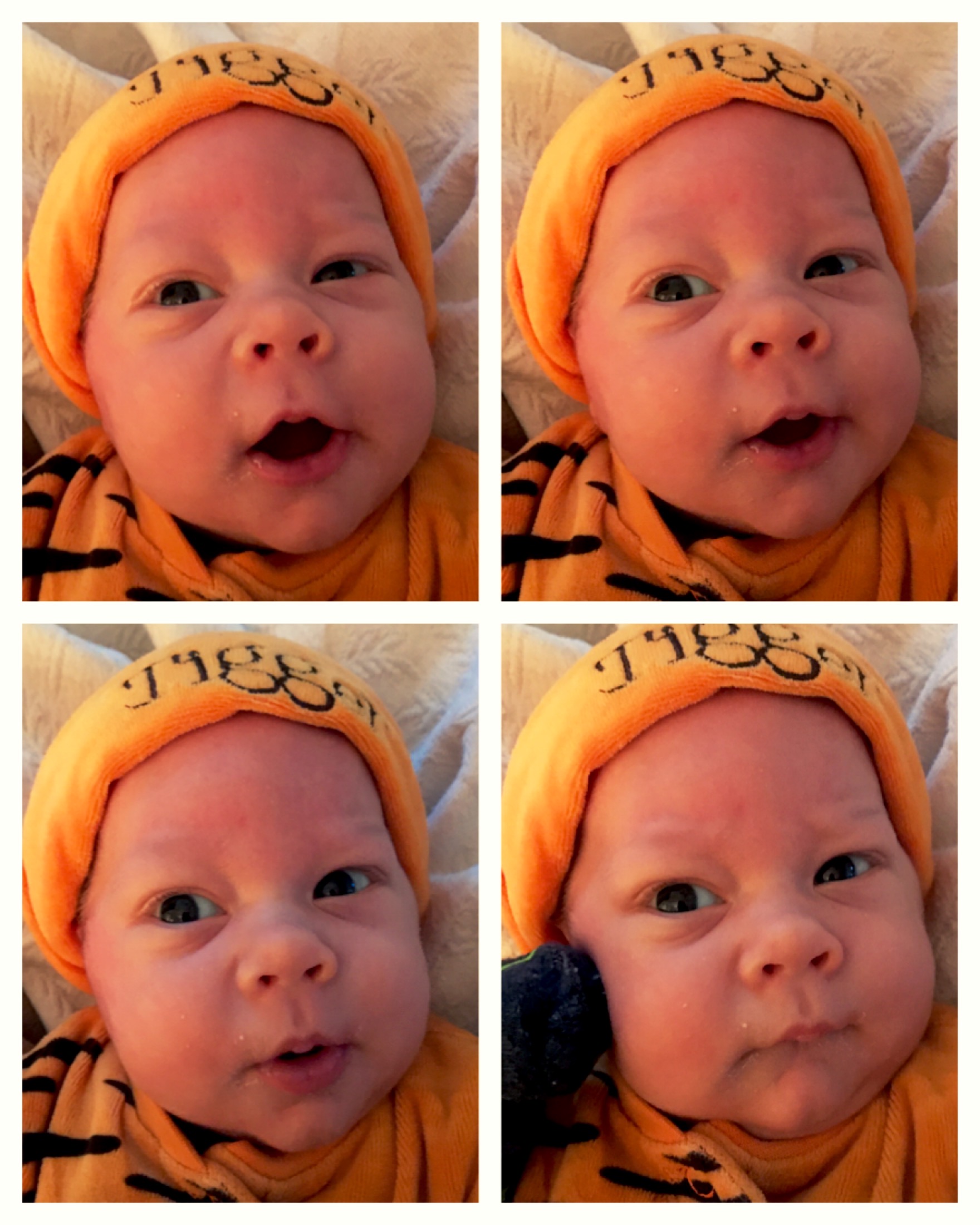 Our fifth son arrived safe and sound on November 1, and we got to see the hematoma that had caused so much angst. It was the largest one our doctor (who has delivered over 700 babies) had seen. In the weeks since, I’ve snuggled Thomas close countless times, breathed in his baby scent, and thanked God for mercifully giving him to us. 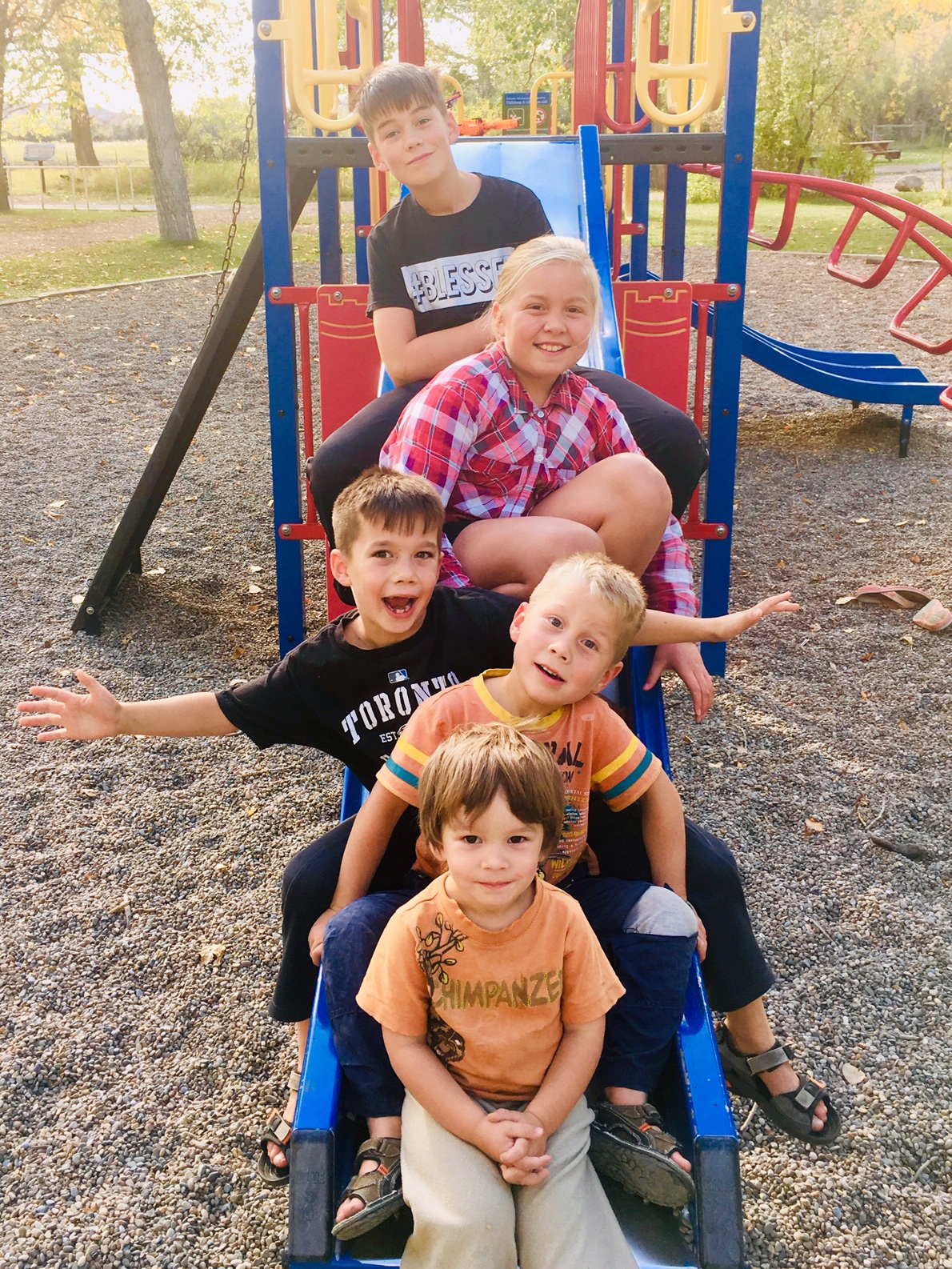 Ours was a year of sticking closer to home because of my pregnancy, but it was packed with lots of little adventures and relationship/character building experiences. We had another much-anticipated holiday in Whitefish, MT, breathing piney air and feeding ducks and hitting up thrift stores and art galleries. My parents got some grandkid-and-dinosaur time when they came with us to the Royal Tyrrell Museum. We made over twenty day trips to Writing on Stone Park to hang out at either the beach or day use area, and also discovered the delights of Gold Springs campground near Milk River. And we relished our new favourite paradise spot (trees and wild berries, a stream and old playground equipment) tucked in at the foot of the Sweet Grass Hills’ East Butte a couple of times, too. 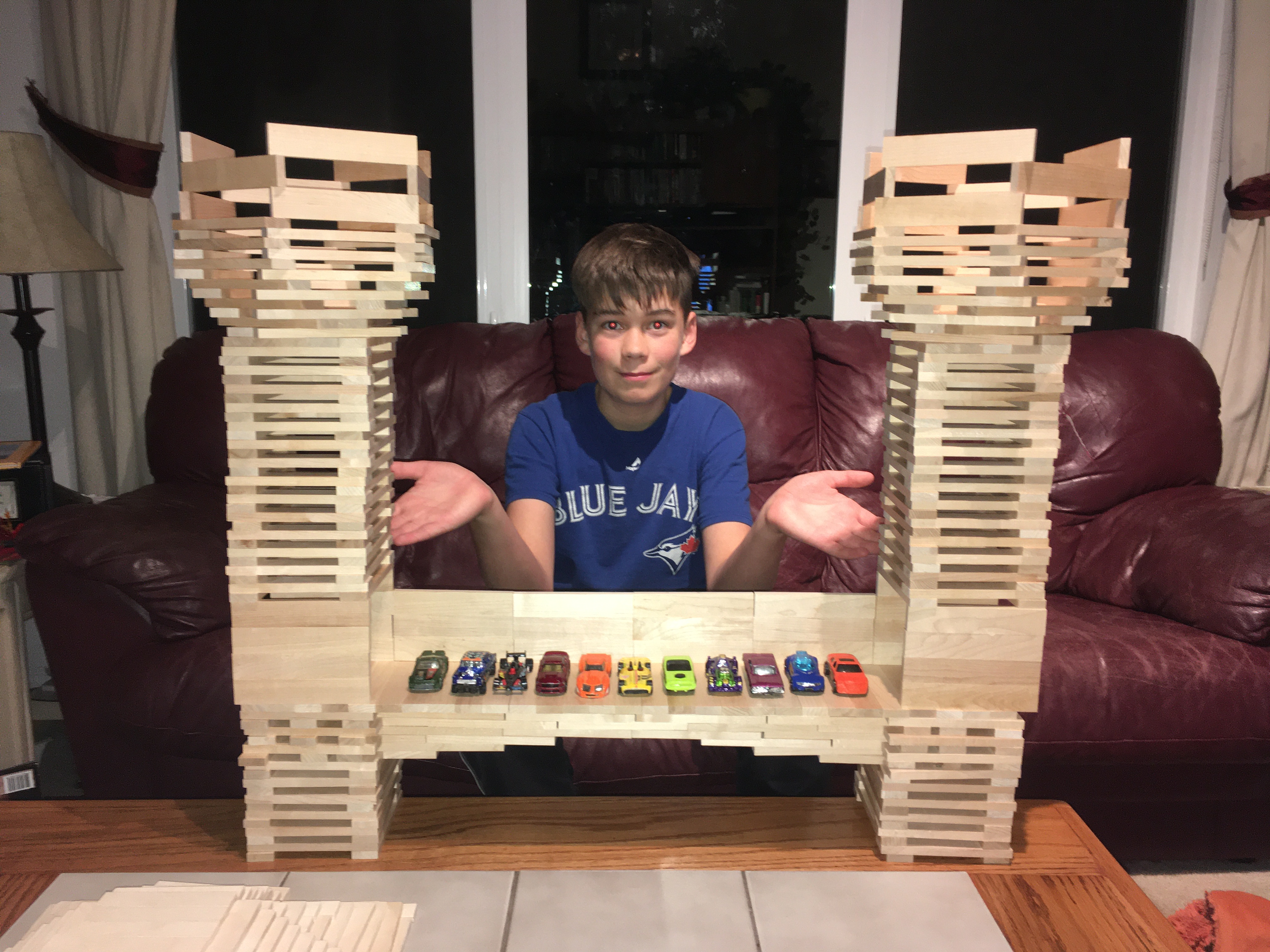 John-Michael (almost 13) discovered the current love of his life early this year. First he unearthed my old set of broken chalk pastels and decided they’d work in a pinch as watercolours. Creature after creature burst onto white paper under his brushes. The joy we had watching him delight in recreating God’s creation must be like the joy God has in watching us live out our gifts and purposes. J-M was thrilled to combine his loves of art and teaching when a teacher invited him to lead an art class at a local Hutterite colony. J-M continues to be a sensitive and hungry soul toward God, and he is eager to relay to us what he learns about the Christian life at youth group or in Sunday School or through other interactions. He loves the talks his uncle Jeremiah and Jesse have given at weekly youth meetings. He and Sophia jumped on the Bible memorizing bandwagon with Jesse, and we can see the spiritual benefit they’ve gleaned out of the Scriptures they’ve memorized. Most importantly, J-M is finally becoming funny. It was a long, and painful wait, but now he actually says things we find humorous. He’s also much more chill and less robotic about holding babies, which is timely. 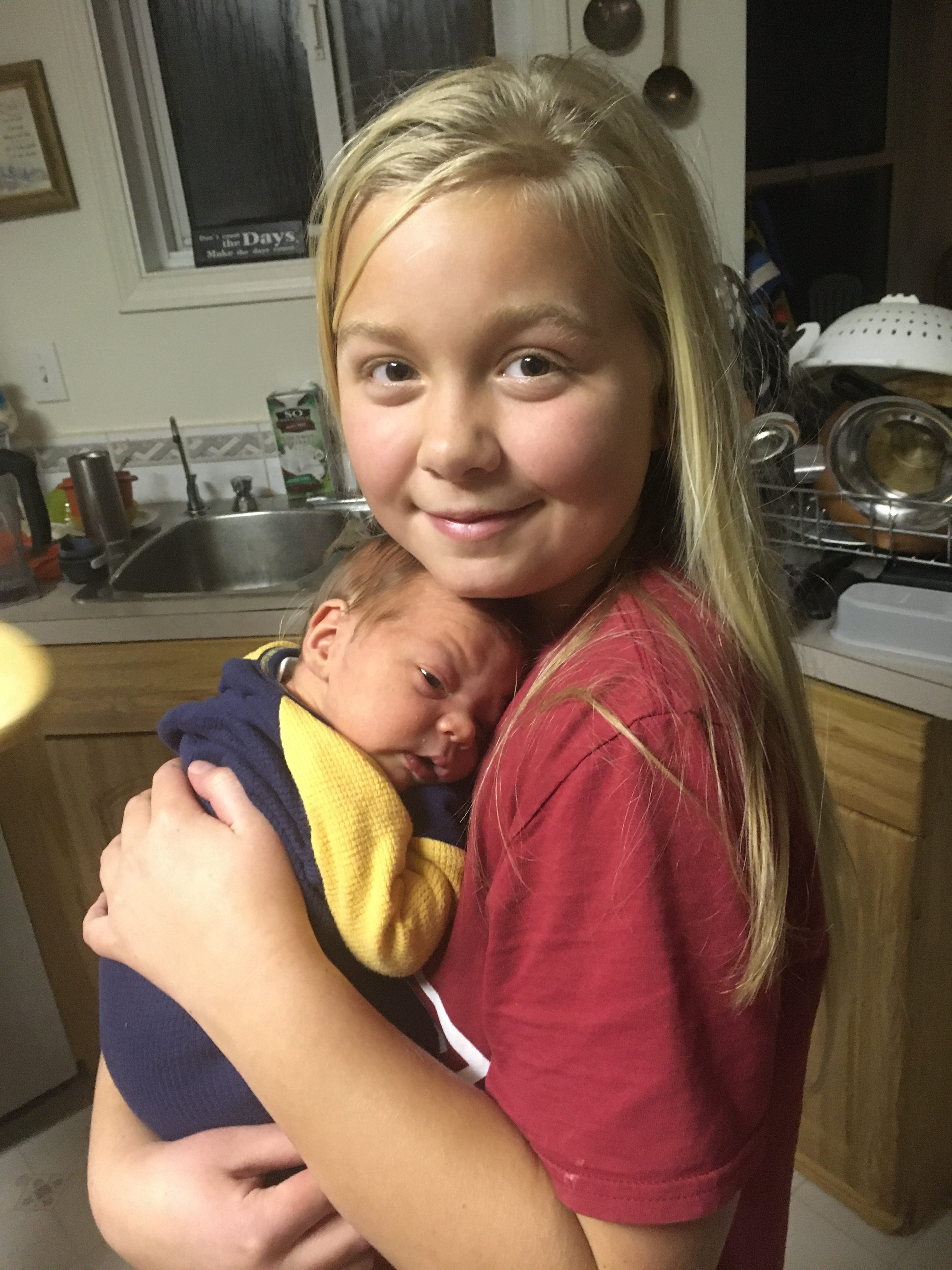 Jesse’s mom describes Sophia (10) as sunshine that lights up a room. We couldn’t agree more! The sometimes stormy and self-centred dramas she used to experience often have mostly given way to a steady, giving nature. The servant heart of Jesus beats strong in this one. She is very aware of how I am doing emotionally, and is quick to offer compassion or help when she senses I’m struggling. We are so thankful for what she brings to our home life, and our boys are thankful, though they might not admit it right away, for their imaginative and sympathetic playmate. She and J-M have shouldered a lot more responsibilities at home this year, since my high-risk pregnancy meant I couldn’t strain muscles. Sophia has become Miss Adept at breakfasts, running the household when we were away for doctor’s appointments, and wrangling Eric. She and J-M have had to work through a lot of friction to be able to team up and take care of their brothers when I haven’t been able to. We are so grateful for the growth we’ve seen in them and the younger boys, who have all begun to occasionally speak that wonderful, shocking offer, “What can I help you with, Mom?” 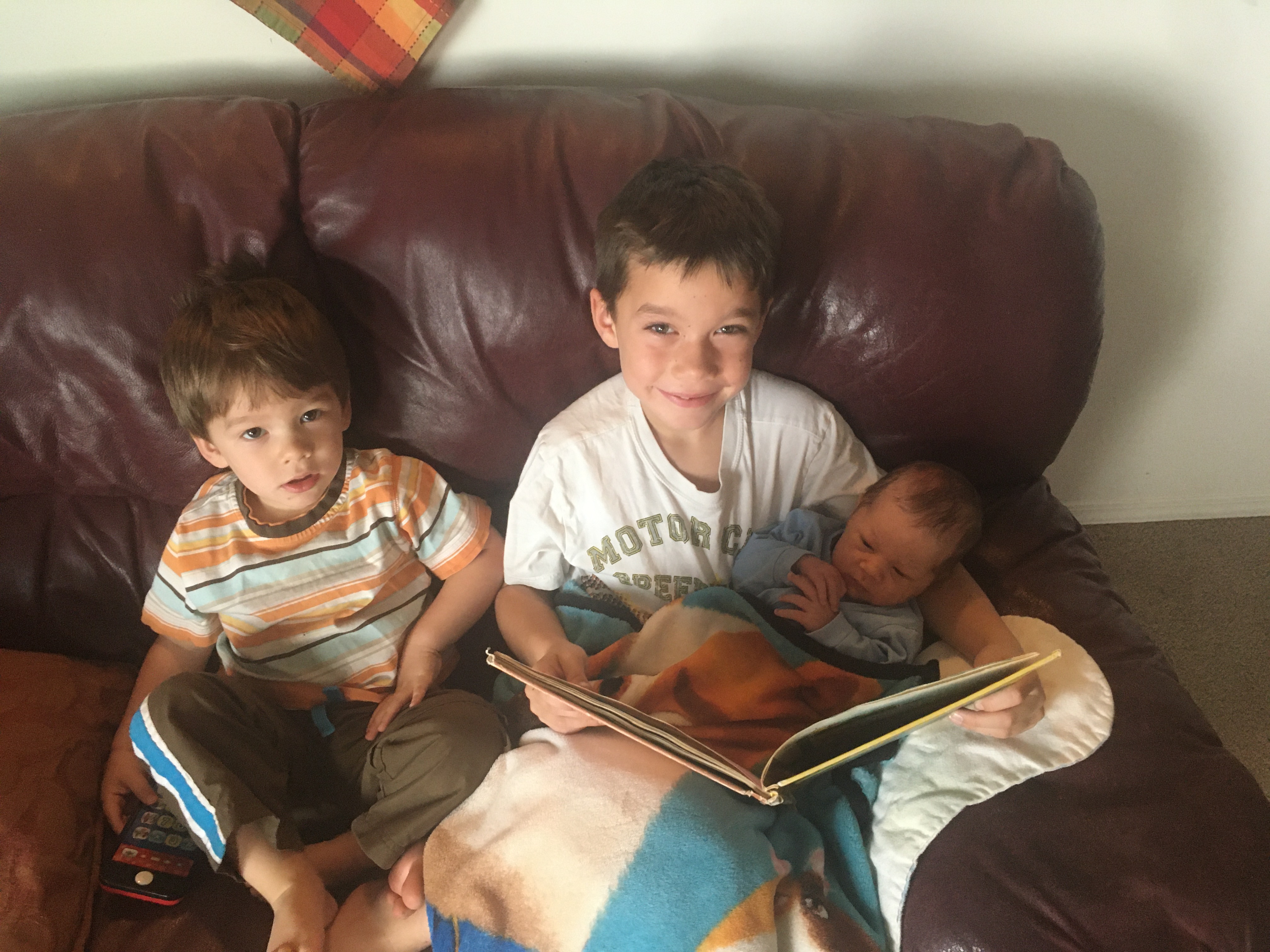 Elijah (7.5) spent hours pitching baseballs to himself this summer and fall, and improved his swing hugely. Jesse finally has a sports buddy, and is delighted to talk shop with Elijah about all things baseball (and recently, football, over Sunday afternoon Seahawks games). Elijah has natural athletic ability that we hope he can develop more someday on local teams. He’s discovered a love for chess and reading this year, too. His enthusiasm for life is infectious. When he is sick, I feel hugely the lack of that zest Elijah usually expresses. There are a lot of mealtimes when we are each sharing our high and low points from the day, and Elijah only has a string of highs – positive moments – to talk about. This, from the Type 1 diabetic kid who has daily insulin injection pain and challenges with diet, dosing, and blood sugar levels. It is humbling to learn from his cup-half-full spirit. 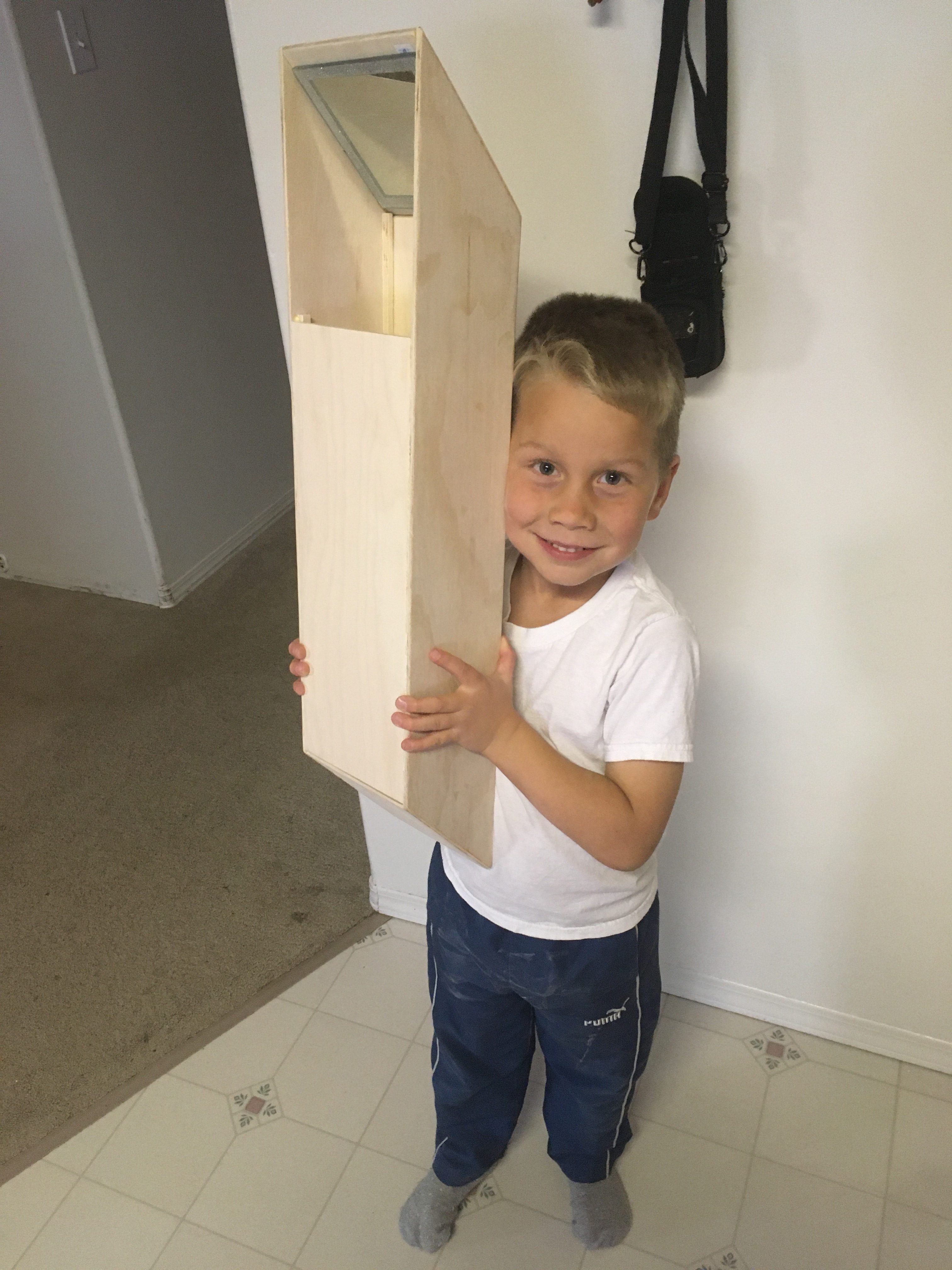 From the time Justin (5.5) could walk, he has opted for other, more lively modes of getting from A to B… like running and jumping. This summer he perfected standing on his head, which explains why it took so long for him to get down the hallway to use the bathroom… he had to do at least three handstands on the way there and back. He definitely has more toned core muscles than I do. He happily played baseball all summer with Elijah, and, having put together all our smaller puzzles multiple times, he is now asking to do 1000 piece puzzles. He is a remarkably cheerful kid; I love his funny, smiley face. During the unrelenting nausea stage of my pregnancy, Justin would often come into our bedroom and reach out his arms to me, saying with a grin, “I have something to give you, Mom,” and he’d lift my spirits with a gentle hug. He has mostly saintly patience toward Eric the Incorrigible, and it’s also pretty heart melting to watch him cuddle Thomas and diligently wipe spit up off his baby brother’s face. 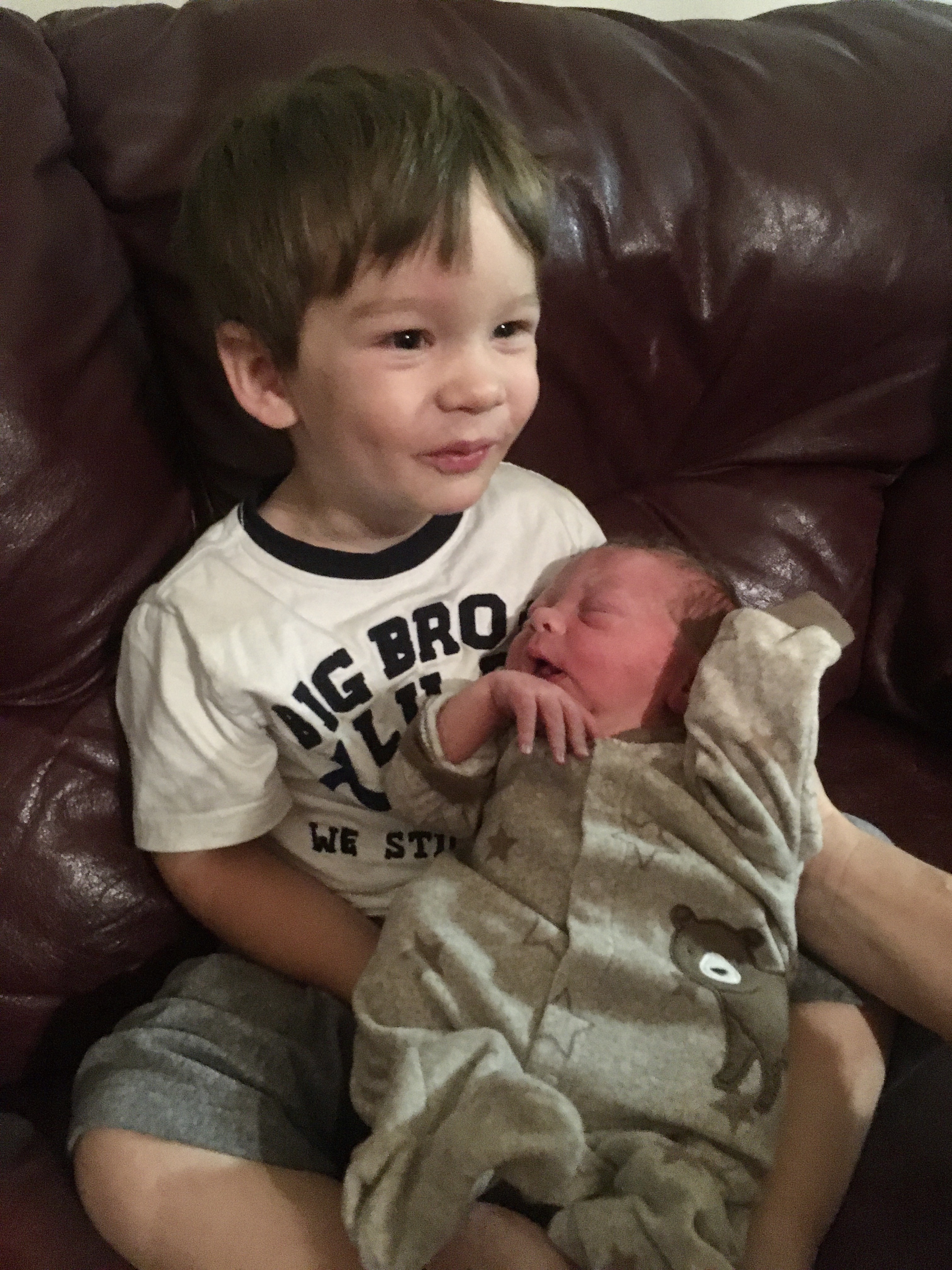 We have often said that it’s a good thing Eric (2.5) is cute, because it helps make up for all the times he’s bit and screamed at his siblings, refused to eat perfectly good food, and made astonishing messes. I know there’s an upside to all these downsides, and that God is going to use that fierce strong will of Eric’s in beautiful ways someday. I’ve told Eric that we named him after Eric Liddell, and that I hope he grows up to bend his will toward running hard after God the way Liddell did. In all fairness, we have also often said that we cannot imagine our family without Eric, and we all adore him even when he’s infuriating. He and Sophia (or “oh-fff” as he calls her) have a special bond, and he prefers her to all his brothers. What Eric lacks in speaking ability, he more than makes up for with expressiveness. Eventually we will have a much better idea what all the grunts and gestures mean. Until then, we will guess at what he’s saying, and enjoy his incomprehensible stories and jokes that are delivered with such gusto. 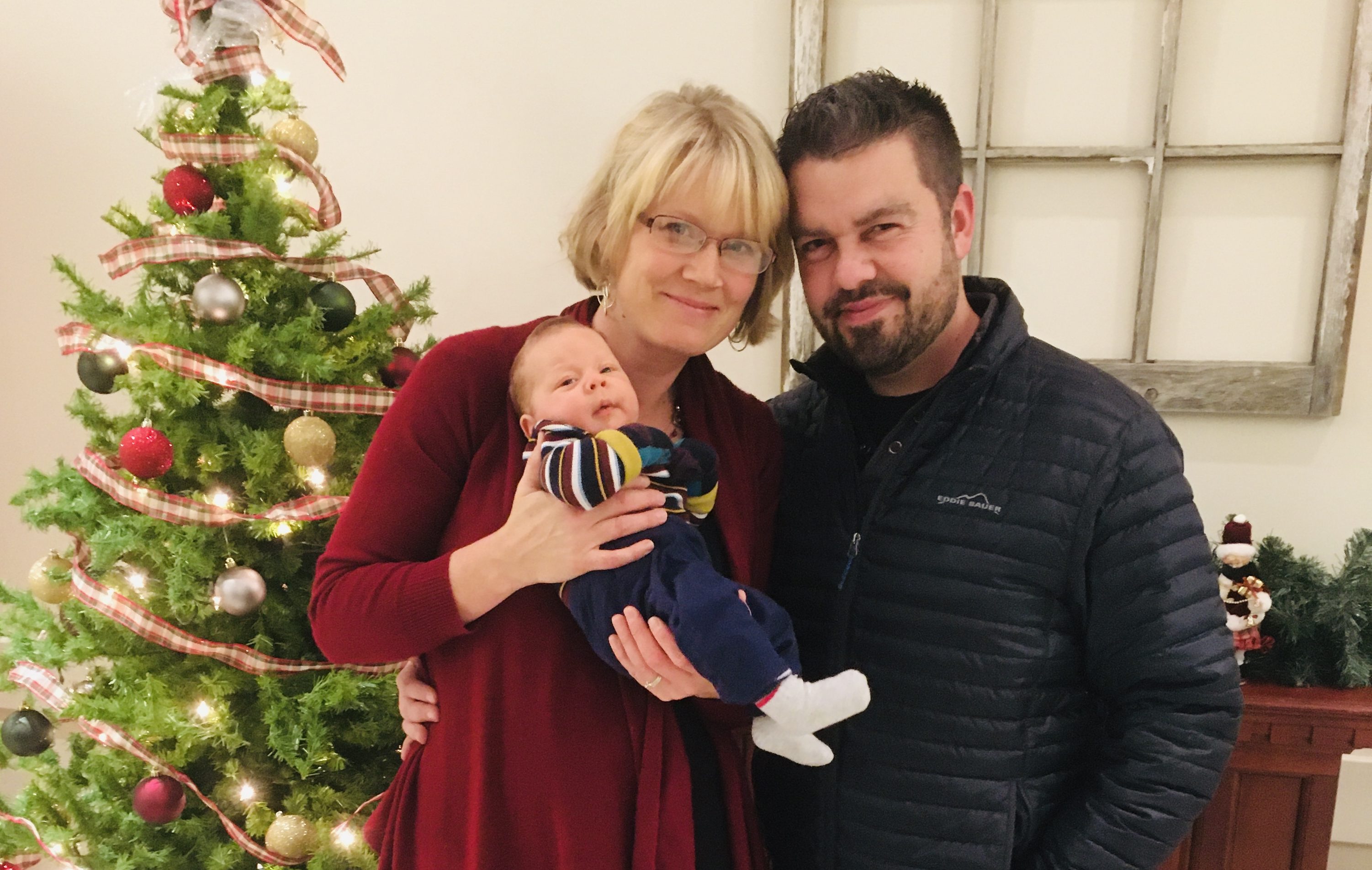 Being a life companion to Jesse, a mother, educator, and diabetes caregiver daily stretches me beyond my short patience and limited store of energy. My mental mantra is often, “I’m a failure. I’ve screwed up everyone.” But when I have better perspective on this challenging, beautiful life I live, I see God working in spite of me. In His mercy, He lets me hit my limits so that I see how much I need Him. It’s an absolute privilege to shape our children’s minds through schoolbooks, conversation, and daily living. I learn alongside them. Two of our goals in home schooling are for each child to develop a love for reading and a love for learning. To that end, I try to read as often as I can, though it’s hard to ignore the endless housework and needy projects. I want to show my kids that I think reading and learning are both enjoyable and a priority. Plus, Jesse says seeing me reading is a sight that he can’t get enough of. What woman doesn’t like hearing she’s attractive, or at least that her nose in a book is attractive?

And then there is Jesse. He is the constant in our lives where we find so much strength and encouragement. He continues to be the selfless, God-hungry man I first met seventeen years ago. Over the last few years, I’ve heard about women whose spirits are deeply hurt by abusive husbands, and have been even more humbled and grateful to realize how different our home is because Jesse chooses God’s way over his way, others over self. I love the rhythm of weekdays with Jesse’s bus driving job allowing him a few hours at home between runs, when he can be involved with the kids’ learning and household projects. I really feel like Jesse is the one who brings the “awesome” to this marriage and parenting journey. And I know the awesome is sourced in God. This year Jesse did some reading on memorizing techniques that, when combined, enabled him to store away more of God’s word than he ever has before. He spends spare moments throughout the day to pray and meditate on what he’s memorized. I can see him becoming less anxious and more focused on hope and peace, and the trickle-down effect of this on the rest of us is inspiring.

We reached out for prayer during my high risk pregnancy, and once again, were reminded of how big and loving our tribe is. We are surrounded by a community of people – close by and far-flung – who love us with God’s love and we cannot get over how rich our lives are to know all these remarkable folks and to have so many of them praying for us. Heading into a fresh year, our hearts are especially full of gratitude for YOU! 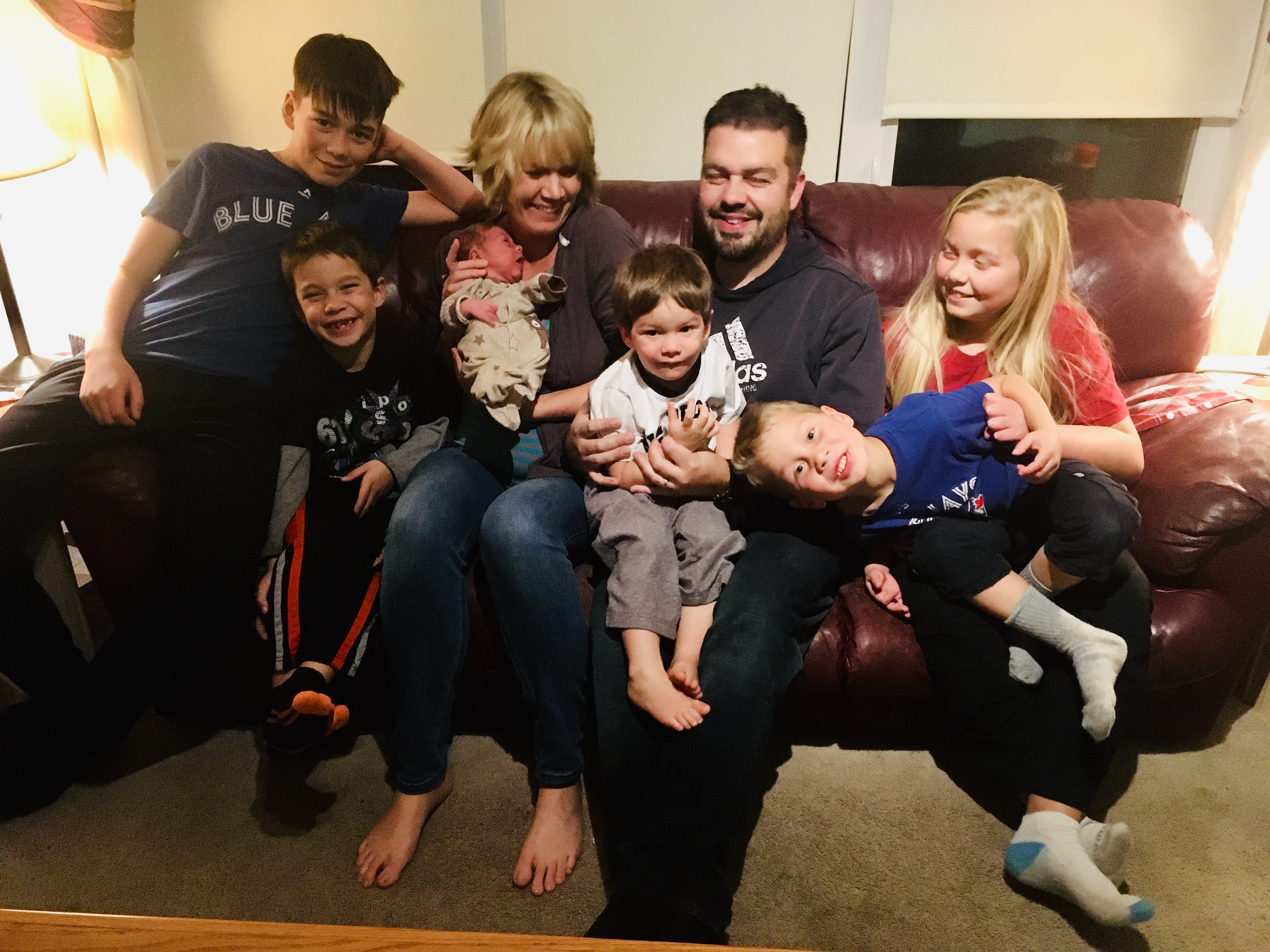 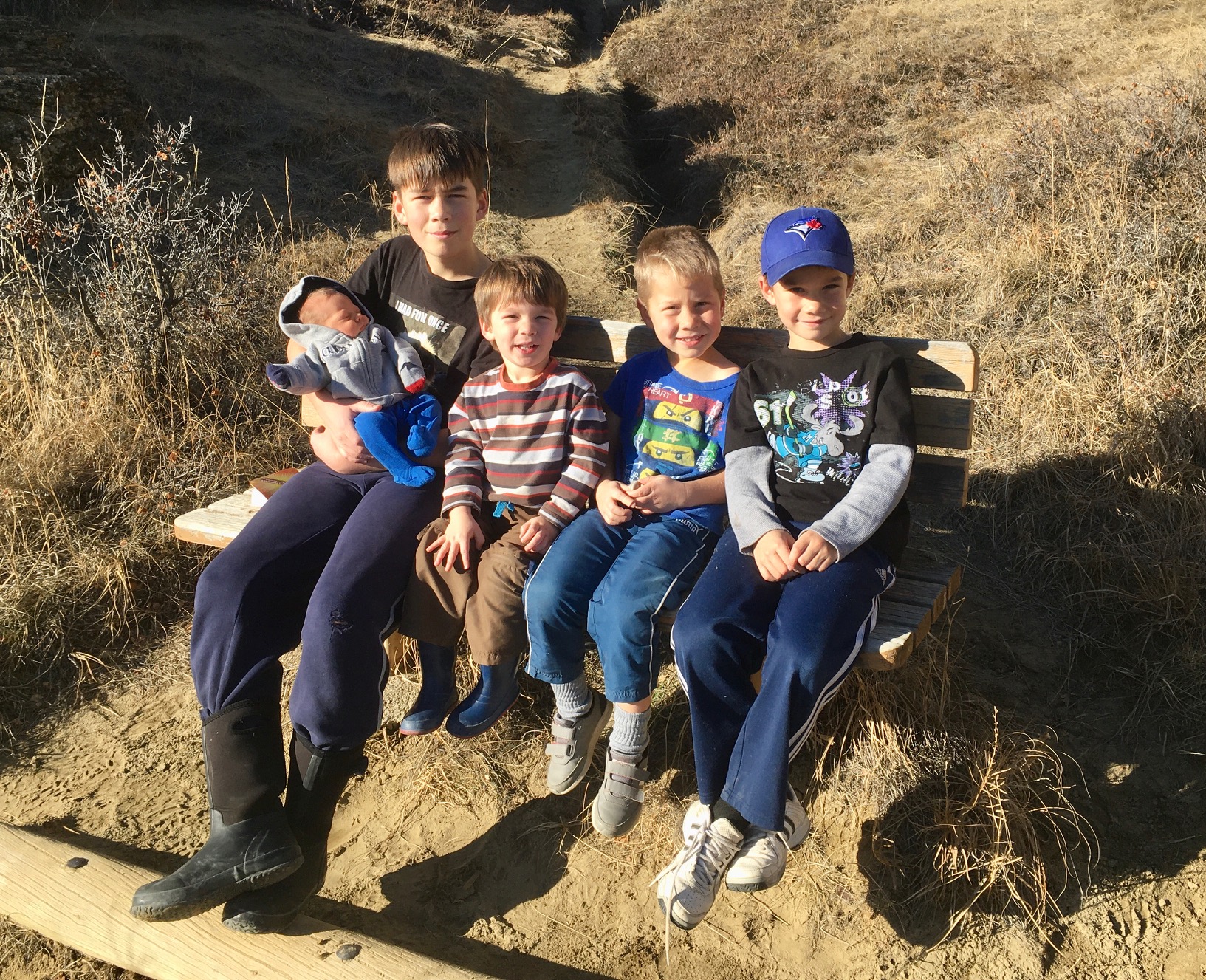