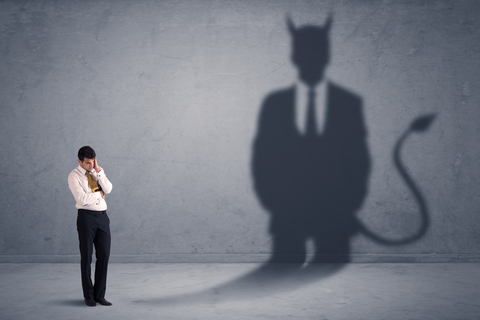 The Easiest Way to Control Your Human

My Most Odious Apollyon Jr.

I want to inform you about the latest research on how to effectively sabotage a human’s life, especially the vermin claiming to be Christians. These Christians pride themselves on having right ideas about God and doctrine, and spend infinite hours arguing and dividing over these ideas.

Their ideas of doctrine and theology are an important battle ground, and I do try to twist them wherever I can. But I have found that as long as their ideas about theology are kept at a rational level of mental assent, and don’t reach the deeper level of their heart, even the most orthodox theology is harmless to our cause.

You see, my fellow destroyer, people have a set of professed beliefs that they think they believe. What they don’t realize is that they also have a deeper set of beliefs brewing in their subconscious, or what Solomon called “the heart.”

The deeper beliefs are what I call impact beliefs because they shape the vermin’s emotions, attitudes, and actions. Impact beliefs are rarely scrutinized, and can be changed without evidence or well-reasoned arguments.

Impact beliefs are ever-shifting, but they also dictate the real life of a human. Whatever the impact belief is in the moment will have the greatest effect on these biped vermin.

Current impact beliefs will decide their emotions. Are they happy or depressed? It depends on what their heart is believing.

Will they choose a destructive action, or find the willpower to say no? What their heart believes will decide.

So how do we win? It’s so easy, I’m almost giddy with excitement. All you have to do is control what they pay attention to, and you can control their whole life.

And how do we control what they focus on? Here’s the beautiful part: we don’t have to! All we have to do is distract them from the things the Enemy wants them to think about! As long as we can keep those horrid realities of God’s love, and his putrid “goodness” out of their mind, their heart will grow deliciously cold towards Him.

Remember that humans are shockingly forgetful. Mere minutes after they stop thinking about a thing, they start to forget it. It’s hilarious, really. If they are not constantly reminded about something, they forget it.

This forgetfulness can be one of our most effective weapons. God’s reality is painfully present in every part of their world, yet if we can just keep their minds thinking about anything but God, they will forget him, and start living as if He is irrelevant to their life!

You won’t even have to mess with the dangerous task of trying to argue against His existence. It’s far more effective if you let the human adopt a mental belief that God exists, but keep their mind on other things. This way their heart forgets about God and they will live as if He doesn’t exist. It’s marvellous.

I remember hearing about how overwhelmed our Father Satan felt when he decided to exact revenge on our Enemy by ruining the lives of the first humans. When he visited their world for the first time, he was shocked by the pleasure and beauty that was available to them at every turn. He knew the Enemy would not let Him inflict physical harm on them because at that point they were innocent.

How could he ruin their relationship with their Creator, when they were surrounded by goodness? He had nothing better to offer. So he came up with his brilliant strategy to redirect their focus. He coaxed them to fix their eyes on the one fruit they couldn’t have, and they forgot about the world of pleasures that God offered.

He couldn’t make them disbelieve God’s existence, but he got them to focus on a twisted idea of God. Boom. With the forbidden filling their vision, their underlying impact beliefs about God and what would make them happy were changed, and they became putty in our Father’s proverbial hands. We’ve been exploiting this same strategy ever since.

We’ve talked at length about our seven favourite sins: Anger, covetousness, envy, gluttony, sloth, lust and pride. Get your human into one of these fabulous states of mind, and they start to self-destruct.

We have done an amazing job of ruining creation, and inflicting misery and suffering. But even still, most humans are surrounded by so much goodness, it makes me want to gag. They have life-giving pleasures available to them at every turn.

How in the world are we able to get them into these deadly states of mind when so much happiness is available to them? It’s all accomplished by keeping what we want in their minds, and what the enemy wants, out.

If you want to ruin a man with lust, keep his imagination fixated on lustful fantasy. Fill his mind with thoughts of illicit pleasure and sensations. Once inflamed with sensual desire, he will forget about the cost of his actions: The agony of his betrayed wife. The empty suffering of the woman selling her body. We easily march a man and his family to hell by constantly dangling shiny trinkets before his mind.

It’s a simple template for however you want to torment your human on any particular day. Keep their minds and imaginations filled with selective imagery that tantalizes and delights them until there is no room for the truths and ideas that the Enemy wants to them dwell on.

If you can do this, you can have your human raging with wrath on one day over an offence that is mostly concocted from their obsession with one aspect of the story. Keep them focused on the parts of the story that make them the victim and the other person the villain. If they only focus on what you want them to, they’ll believe whatever you want them to.

You can have them debilitated with depression by leading their thinking toward the negative aspects of life; they will forget about the things that give them meaning and hope and purpose.

I could go on, but I think you have the basic idea. Keep it simple, keep them distracted.

Do all you can to keep them from reading the bible, and if they do insist on their token five minutes of reading, make sure they don’t meditate on it through out the day. And, for hell’s sake, don’t let them memorize that horrid Word! Scream in their ear whenever they try! Convince them it’s too hard, or that they don’t have the ability.

The memorized word is so dangerous to our cause, because the Enemy will reclaim their attention through it. I can’t tell you how many humans I have lost, how many temptations have failed, how many spells of anxiety and depression have been broken, all because a memorized verse came back to their mind at the worst possible moment!

I don’t want to end on a negative note. We have it easier now than at any time in history to distract them. Humans’ addiction to their phones and media and music, leave us with so few gaps of time that we need to protect.

The future is bright, my friend. I see waves of despair and emptiness ahead for them as these creatures forget about what God has done for them. It’s so satisfying to watch: God is surrounding them with good things, whispering His love and affirmation. He’s calling them to a deep joy and rich fellowship, and they don’t even notice!

Keep up the good work!

How To Sabotage Conversation

Breakdown: A Demon’s Guide To Communication