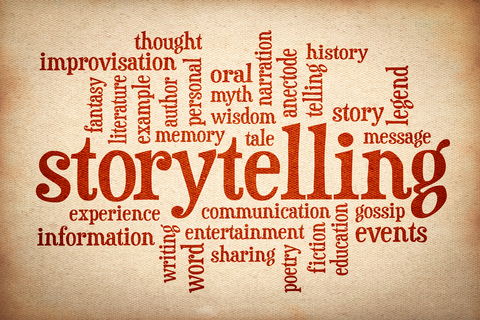 Guard Your Story With All Diligence, For Out Of It Spring the Issues of Life

We have a deep psychological and emotional need to understand what is really going on. We are driven to figure out how events and actions are connected,

so we can predict what is coming. This need to know the story is connected to our desire to know the future.

The story we believe we are in informs our view of what the problem is, and what solution is needed. It tells us who the enemy is and what we must do to counter him/it.

We feel adrift and aimless if we don’t have a clear understanding of what story we are in. But a compelling story can light a fire of motivation, making us willing to sacrifice everything for that story.

The story we believe gives us a compelling vision of what needs to be done, and what can be accomplished if the stories ends are achieved. It determines what we are willing to sacrifice to achieve the stories’ goals. It is the root of humanity’s greatest accomplishments and most horrendous atrocities.

Socialism, the most deadly idea of the 20th century, was a captivating story about the world’s primary problem and what could be done to fix it.

Socialism’s definition of the problem: People lived in increasingly grinding poverty, because free market capitalism allowed the greedy wealthy to grow increasingly rich as they exploited the poor.

Socialism’s solution: Through state regulation, transfer wealth from the corrupt greedy wealthy to the poor, so that whole world could live in harmony and equal wealth.

This idea so compelled men and women that they willingly sacrificed millions of people to achieve utopia.  But the story of socialism was incomplete and did not take real world consequences into account. For instance, what will motivate a person to innovate and put in extra effort if the financially successful are punished through theft and taxation, while those who do nothing are rewarded?

Socialism’s story was compelling, but wrong. Every nation that has adopted pure socialism and rejected capitalism has lost their wealth, leaving the majority with far worse poverty and shortages than before.

We need to be careful about what story captivates our heart, because adopting the wrong story can make us accomplices to great evil. Stories stir noble movements but also foment mobs and genocide and fracture churches and marriages.

Belief in different stories divides families, churches, and countries.  Both sides see the basic information, but connect the dots in different ways. They adopt different reasons for the events, different villains, and different solutions.

Story’s power to divide lies in the reality that we interpret the evidence in light of the story we believe, instead of letting the facts determine our story.

Stories are so divisive because both sides have their own set of fact checkers, and all the data gets interpreted or rejected in light of their assumptions.

Story is one of Satan’s favourite tools to sabotage humanity. He’s been using it since the beginning, when he told Eve a different story about why God commanded them to avoid the tree of the knowledge of good and evil. He told them what was REALLY going on and sowed distrust. We’ve paid the price ever since.

So how do we guard our hearts and minds from false stories?

When Satan tried to tempt Jesus in the wilderness with a false story, Jesus responded every time with, “It is written…” Jesus let the Word of God define all aspects of the story He believed.

With today’s editing and reality-altering techniques, misinformation goes viral. Statistics can be twisted to prove any point. Cable news, mainstream media, and independent groups all have an agenda to spin news to fit their narrative.

The sources that agree with us will be the ones that appear valid and trustworthy. But don’t be deceived. There is only once source of truth that can be truly trusted: God’s Word, both the incarnate Son and His Written Word.

The Story revealed by God is that everything was created by Jesus and for Jesus, the King of Kings who is working all things according the counsel of His will and for the good of those who love Him.

We were made for a rich and satisfying relationship with Him and each other as we pursue work and art that glorifies God, and seek to live in harmonious communities that praise and worship God. But rebellion against God and looking to other things for satisfaction has made us enemies with God and each other.

The real Problem we face is alienation from the One who made us and loves us.

The real Villains are our own deceptive hearts and the dark spiritual beings who want to destroy us.

The real Solution is being reconciled to God through the gospel, the good news of what God has done to make rebellious sinners right with a Holy God.

We are all going to stand before God on Judgement day and give an account of our choices. God’s opinion of right and wrong – God’s story – is the only one that will matter.

God has given us an infallible guide to discern truth from error, a fact checker we can trust to test all things: “All Scripture is given by inspiration of God, and is profitable for doctrine, for reproof, for correction, for instruction in righteousness, that the man of God may be complete, thoroughly equipped for every good work.” 2 Timothy 3:16-17

We need to passionately point people to Jesus, not our favourite news source. Everything we need to know to fare well on judgement day is in His Word.

So immerse yourself in God’s story, turn your eyes on the Truth and gaze at His beauty and holiness. Let the story of the gospel inspire you to make sacrifices to meet the needs of the poor and needy and to stand up for the oppressed.

Living in God’s story will fill your heart with joy and hope and will be a beacon to those drowning in despair and depression.

We need to return to God and His ways. No other idea or story is worthy of our time and sacrifices.